Irritable bowel syndrome (IBS) is a disorder characterized by abdominal pain or discomfort, and altered bowel habits; for example, chronic or recurrent diarrhea, constipation, or both – either mixed or in alternation. It has become a major health concern.

The exact cause of IBS is not known, and Western doctors consider IBS to be a functional gastrointestinal (GI) disorder. Functional GI disorders happen when your GI tract behaves in an abnormal way without evidence of damage due to a disease.

According to Traditional Chinese Medicine (TCM), IBS is a condition caused by Spleen and Liver disharmony, which manifests as Liver Qi stagnation and Spleen Qi deficiency.

TCM relates the symptoms associated with IBS to stress. Stress affects the Liver Qi (energy), which handles the smooth flow of Qi throughout the whole body; excess stress then results in Liver Qi stagnation. The Spleen is in charge of digestion according to TCM, and stress weakens Spleen Qi, leading to disturbances of the GI system. The major IBS symptoms such as abdominal bloating or pain, mixed or alternated constipation or loose stool, mucus in the stool, or incomplete evacuation, are all results of Liver overacting on the Spleen and Stomach.

A study done in 2009 in the USA on managing IBS symptoms with acupuncture showed that after 4 weeks of twice-weekly acupuncture treatment, average daily abdominal pain/discomfort improved, whereas the control group showed minimal reduction. The intestinal gas, bloating, and stool consistency also showed improvement. These findings show that acupuncture treatment shows promise in the area of symptom management for IBS. (2)

In addition, a large amount of clinical research in China has showed that TCM therapies, which include acupuncture, acupuncture with electric stimulation, moxibustion, auricular acupuncture, traditional Chinese herbal medicine and external application, have positive results for patients with IBS.

Clinical studies have also shown Chinese herbs to improve the effectiveness of IBS treatments. For example, Fuling (Poria) and Shanyao (Rhizoma Dioscoreae) can relieve diarrhea. Baizhu (Rhizoma Atractylodis Macrocephalae) is well known for its regulating and dual effect on the gastrointestinal tract: it treats diarrhea at low doses and constipation at high doses. With this dual effect, it is the ideal herb for relieving the major IBS symptom of alternating diarrhea and constipation.

Since stress is a major factor that can worsen or trigger IBS symptoms, another important point for IBS patients to keep an eye on is the diet. Patients should avoid gas-producing foods such as:

Other foods containing lactose may also induce symptom flare-ups in some people. It is important to remove spicy and acidic foods from the menu that stimulate the lining of the intestine. It is also necessary to stop smoking and reduce the intake of coffee, since both may irritate the bowel.

Chew on This: The Role of the Spleen 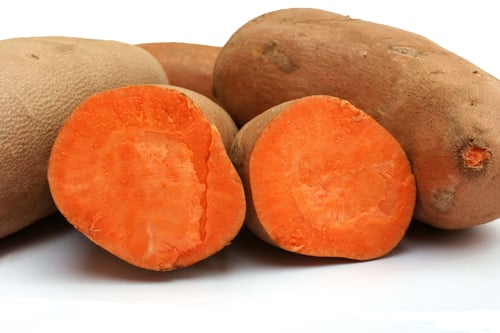 Jane hasn’t had much of an appetite lately.  Even when she eats a small meal, she feels full and bloated.  She doesn’t have much time to eat anyway, because she is always on the go.  Jane is on the verge of making partner at her law firm.  Her days are highly stressful and she has a difficult time relaxing, even after work.  Her mind seems like it's always going and she is usually ruminating over the same things.  She often has trouble with foggy thinking.  Jane thinks she is getting a cold because she feels congestion in her head and chest.  She starts taking cough syrup and vitamin C supplements, but it's not working as well as she would like.

She decides to see a practitioner of Traditional Chinese Medicine to get a second opinion of her symptoms. Traditional Chinese Medicine has an approach that may be helpful to Jane and others who suffer from similar conditions.  She thought for sure the problem was in her lungs.  But after performing a thorough evaluation, the physician informed Jane that the problem was actually with her spleen.  A weak spleen can contribute to a loss of mental focus and digestive problems that can affect other systems throughout the body.

Digestion begins with the Spleen. On a physical level, the spleen handles the “Transformation and Transportation” of food.  The stomach “governs the intake” of food, but the spleen extracts nutrients from the food and sends that nutrition to other areas of the body.  There is an old saying in traditional Chinese medicine that states, “The Spleen is the source of generation and transformation”.  This is not only a description of the spleen's bodily activity, but it also relates to the spleen’s ability to aid in the generation of new ideas. On a psychological level, the spleen allows us to process thoughts and analyze information.  The physical and psychological aspects of the spleen are linked.  If someone is having problems with their digestion, it's common for that person to also suffer from muddled thoughts or foggy thinking.

This concept is not exclusive to Traditional Chinese Medicine.  In the United States, it is not uncommon to hear people say a concept is “Hard to Digest” or they need time to “Chew on it” when they need more time to think about an issue.  Americans already have a frame of reference for understanding the connection between digestion and mental clarity.

The physician's diagnosis seems reasonable. Given the TCM perspective on the role of the spleen, Jane’s spleen is weak. It's not able to process the food she is eating.  She feels full but things are not moving well.  Her weakened spleen also makes it difficult to process thoughts and to transform them into action.  What about her congestion?  That is also another important indicator.  Another TCM saying is “The Spleen is averse to dampness.” Congestion in the head and chest could be another indicator that the Spleen is weak.

Jane received acupuncture and felt better by the time she left.  The doctor also prescribed some Chinese herbs.  He recommended that Jane stop taking the cough medicine for a few days and also advised her not to stress as much.  He gave her some dietary recommendations, as well as some Qigong breathing techniques that could help her to relax.  After a few days, her condition improved.Jane is a fictional character used to illustrate a point, but the importance of Spleen health is real.  If you or anyone you know is suffering from similar conditions, they should seek the advice of a licensed professional.  Until then, to help strengthen your spleen, Chicken, Oats and Sweet Potatoes are just three “foods for thought”!