The theory of the natural elements is an enduring philosophy across cultures, appearing in separate countries in vastly different eras around the world.

The ancient Greeks used the five elements of earth, water, air, fire, and “aether” (quintessence/spirit) as a guiding principal to better understand the universe. Both ancient Egyptians and Buddhists understood the elements as fire, water, air, and earth. Hinduism utilizes the five elements (earth, water, fire, wind, and “aether”) as well. In fact, the seven chakras pair with Hindu and Buddhist five element theory. Western astrology also makes use of the four classical elements in astrological charting.

In Traditional Chinese Medicine (TCM), Five Element theory (also called Wu Xing) is a powerful, foundational lens through which medicine, our bodies, and the world at large can be viewed. Fire, Earth, Metal, Water, and Wood are understood to be the Five Elements in TCM.

Each element is awarded a number of characteristics and correspondences. They all have their separate natures, movements, directions, sounds, times of the day, and much more. Similar to Yin Yang theory, many specific aspects of life and the world can be attributed to a certain element.

In addition to these basic qualities, the elements also correspond with certain internal organs, tastes, emotions, and sense organs in Traditional Chinese Medicine—a very important feature of the theory with great implications to the medicinal practice.

Below are the Five Elements and their commonly discussed and widely held attributes. 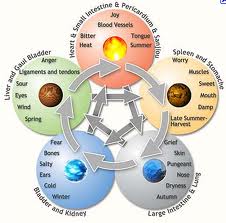 In TCM, the Five Elements are dynamic: they create, control, and constantly interact with each other.  Each element is said to generate—give rise—to another element. This generating sequence is a type of “mother-son” relationship, where the parent gives life to and nurtures the child. In Five Element theory, Fire generates Earth. Earth generates Metal. Metal generates Water. Water generates Wood. Wood generates Fire. One jumping off point for remembering this sequence is to think of how rubbing twigs (ie: wood) together can create fire.

Additionally, each element controls and is controlled by another element, creating a system of checks and balances. Ideally, this system guarantees that one element will not over-dominate another element for any lengthy period of time. The controlling sequence is as follows: Fire controls Metal. Metal controls Wood. Wood controls Earth. Earth controls Water. Water controls Fire. An easy way to begin memorizing the controlling relationships is to think of how water can easily douse—control—fire.

Disturbances in these natural generating and controlling orders give rise to pathological symptoms. For instance, if the Wood element is too excessive in the body it may begin “over-controlling” the Earth element. This is a common pathology in clinical practice. One way it can be used is to understand why feeling excessively angry (Wood’s emotion) can give one a stomachache (the Stomach is one of Earth’s organs).

These symptoms are intricately analyzed in AOMA’s didactic classes and utilized to great effect in clinical settings. Even without going into the depth required in Chinese medicine school, however, Five Element theory can provide structure to our daily lives, an understanding of the interconnectedness of our planet, and a richer appreciation of our bodies. Put simply, the Five Elements can be seen as a natural law of the universe.

About the author: Carly Willsie enjoys putting Yin Yang theory into practice as an acupuncture school student and tutor. Carly grew up on a dairy farm in upstate New York and has a background in journalism and publishing.