You’ve probably heard someone describe the sensation of nervousness as having “butterflies in the stomach.” Perhaps you’ve referred to a person displaying restraint in the face of hardship as having a “stiff upper lip,” or a sensitive person as “wearing their heart on their sleeve.”

What about complimenting someone’s gallbladder when they accomplish something brave? Probably not, right?

This saying, often heard in China (and AOMA’s classrooms), has its foundations in the Traditional Chinese Medicine concept of the gallbladder as the source of courage and judgment. Attributing emotions, bodily manifestations, and physiological functions to organs is an important aspect of our medicine and an incredibly informative lens through which to view the body.

Every organ has unique characteristics and functions. They are also said to “open into” certain body parts (thereby controlling that body part’s functioning) and manifest in others.

Opens Into: Nose
Manifestation: Hair of the skin

Opens Into: Ears
Manifestation: Hair of the head

Each Zang is paired with a Fu—one of the Yang organs. The Fu organs are hollow. They primarily receive and transport food and water throughout the body. These more active functions are the reason they’re considered to be more Yang than Yin. The organs and their pairings are listed below.

Zang: Pericardium (Though not always grouped with the five Zang organs, the Pericardium is considered the protector of the heart; it is also an acupuncture channel.)
Fu: San Jiao (also called the Triple Warmer and Triple Burner) 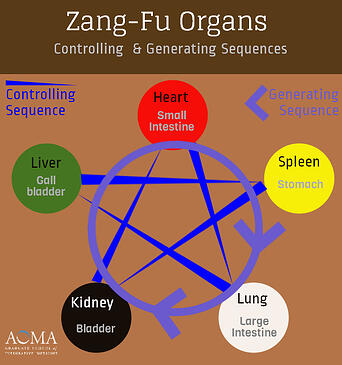 t is important not to conflate the TCM organ with the Western anatomical organ. For instance, the Spleen in TCM isn’t necessarily the organ that filters the blood. Some features do overlap—for example, the Heart being involved with blood —but it’s best not to think of the Zang-fu as literal organs, but rather consider them figurative entities.

These controlling and generating sequences are used to visualize the source(s) of pathological conditions and can be used to approach a treatment. For example, it is said in TCM that if an element (or organ) is in excess, an acupuncturist should “sedate the child.” So, if the Liver organ was hyperactive in a patient, the acupuncturist may choose to sedate the Heart.

The Zang-fu system is an incredibly important and consequential method of TCM diagnosis: It influences the diagnostic decisions, treatment plans, herbal prescriptions, and overall understanding of acupuncturists and herbalists the world over. The Zang-fu organs (including the Pericardium) also constitute the twelve primary acupuncture channels and are consequently used on a daily basis by most practicing acupuncturists. Take a moment to review the Zang-fu system and soon you will discover an entirely new way of viewing the human body.