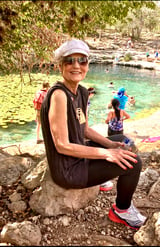 - A tribute from Pam Ferguson (AOMA's ABT dean emerita)

AOMA alums from our north campus days will remember Sherry Gaddy Coombes with great affection from her years (2004-2009) as student adviser/recruiter. Yes her husband (retired USAF Colonel and Vietnam Vet) Jimmie Coombes was our AOMA President at the time (1998-2009).

Sherry – a longhorn graduate and long time campaigner against the death penalty – was also an ardent pet rescuer. She had a wit second to none. Time in her office was always informative, and loads of fun. Mutual friends and I met Jim and Sherry regularly for hilarious lunch dates – our last date in March was canceled when she told me she was in hospice care, and she passed peacefully a couple of days after our phone call.

have floored anyone else. I used a pseudonym for her, and marveled at her ability to survive multiple surgeries, rounds of chemo and ongoing metastases.

Her secret? Apart from a buoyant love of life and a wonderfully caring family, Sherry worked out rigorously each day for an hour. Besides walking – she completed 30 mins of cardio on her elliptical machine, reps of bench pressing and leg lifting of fairly light weights, some hand weights, partial push ups, stretching and balance practice. Early on she also received Acupuncture from one of our wonderful AOMA deans, and excellent bodywork.

Sherry always looked stunning throughout the last decade, and claimed workouts helped her maintain the fitness to endure.   I'll never forget her magical laughter each time I called her “the poster child of cancer survival” as she bucked all the stereotypes.

Sherry is survived by Jim, their two children and five grandchildren. Her obit was in the Austin American Statesman 3/26/2021. A memorial service is planned at the First Unitarian Universalist church on 49th St. Time and date to be determined later. Donations in her name can be made to NOCC (ovarian.org) or Tiger Haven Sanctuary (tigerhaven.org).