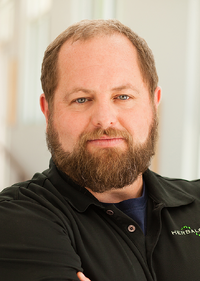 All students at the AOMA Graduate School of Integrative Medicine are required to study both acupuncture and herbs. Some students tend to gravitate toward one or the other of those disciplines, as is the case with AOMA alumnus David Jones, who sees himself more as an “herb guy.”

Before entering graduate studies at AOMA, Jones earned his Bachelor of Arts degree in Advertising from the University of Texas at Austin. Although he knew AOMA was located in Austin, he didn’t know much about it until he began exploring options to go back to school. He finally decided to enroll at AOMA for graduate studies after he sat in during a class and thought it was, as he says, “the coolest thing ever.”

AOMA is known for drawing some of the finest professors from China, making its herbal program one of the most comprehensive and challenging in the country. During Jones’s studies at AOMA, he was especially attracted to the herbal curriculum because of his long-time interest in the chemistry of medicinal plants, and he wanted to take advantage of the knowledge and experience the professors at AOMA had to offer him in this rigorous program.

Following his 2006 graduation from AOMA, Jones chose the path many graduates do, launching a small acupuncture practice with a well-stocked herbal dispensary and working hard for the three years that it normally takes to build a successful practice. However, in 2007, AOMA alumnus and friend Jeanine Adinaro pitched Jones the idea that eventually led to the formation of Third Coast Herb Company (TCH). Jones says, “It was one of those ‘this might just be crazy enough to work’ moments.” 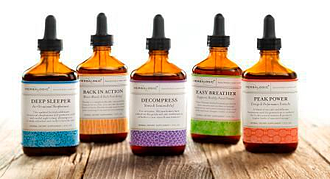 While Jones still sees a few acupuncture patients, he says most of his time is focused on building Herbalogic into a national brand. Although he acknowledges it is a lofty goal, “We have a pretty good start on it. We sell retail in about 60 outlets in four states and all 17 Texas Whole Foods. We have recently extended ownership to two nationally recognized marketing and branding professionals who bring over 40 years of experience to the table and we have hired on a couple of brokers so you can buy Herbalogic from Fayetteville, Arkansas to Boerne, Texas. We also have a large number of happy practitioners. Although we sell mostly retail our line makes a very accessible entry point to herbs for some patients who are resistant to the idea of barks, bugs, lizards and leaves” Jones says. “To develop the line, we made a list of the most common ailments we saw in the clinic. We then matched those ailments with herbal formulas we knew would work really well and work really well in an extract form.” The original five conditions the business partners decided to address are allergies, insomnia, stress, low energy, and musculoskeletal pain. Four new formulas are currently being tested and as Jones says, “some of them are going to change lives.”

Jones and Adinaro have seen the company through challenges. “You just have to be flexible, be prepared to revise your business plan again and again, and never lose sight of your goal. One of my goals is to sell one million units in a year. If we can do that, then I get to have touched people’s lives with Chinese medicine a million times,” Jones says. The most satisfying aspect of his business is, Jones says, “is when someone I don’t know sends us an email telling us how much our products helped them or when I have practitioners call us to tell us a story about how much our products helped a patient.  We are passionate about Chinese herbs and to see someone who may have only had this small exposure to them spreading the word is one of the reasons we went into business.”