Transformation: How I Became an Acupuncturist

My journey began in 2009. Four years later, and I am just about wrapping up my experience at AOMA.  It has definitely been a long haul, and I have changed a lot along the way.  When I started the master of acupuncture and Oriental Medicine program, I was only 23 years old.  I was frustrated about healthcare and the state of American medicine, and I had decided to take the first step along a path that would lead me to greater understanding of not just medicine, but the entire body-mind-spirt axis of the human condition.  Some aspects of my personal growth were not connected to AOMA, but just a natural progression I would have followed regardless of my education.  However, there were undoubtedly parts of my AOMA education that have changed me forever.

The qigong components of the program have also greatly impacted my perspective on life.  It’s one thing to intellectually learn the energetic theories of the body, but it’s another to actually feel the energy moving up and down the meridians or drawing energy into and pushing it out of your body.  If there was ever any proof needed for the existence of a world beyond the physical, my experience with medical qigong at AOMA has provided it.  I had an inkling back in my Massachusetts days when I was exploring Tibetan Buddhism, just a few meditative experiences that pointed to a non-physical realm.  Medical qigong totally sealed the deal.  Clinically, I noticed that my patients who received medical qigong felt as if they got more out of the treatments.  In addition, several patients who received only medical qigong were absolutely stunned by their experience, as if they were floating, for instance.

Another core pillar of my experience at AOMA was the AOMA Student Association (ASA).  At first, I just went to a few meetings here and there.  At the time there were 4-6 people at each meeting.  When I later ran for Vice-President of the ASA, I was experiencing a particular surge of confidence in myself and my abilities.  Although I ran unopposed, I was proud because it was the first office I held for any association since high school.  By the time I became ASA President, the average size of the meetings had grown to 12-15, and members were becoming a lot more active.  I really enjoyed seeing the organizational growth that we had stimulated.  The shining achievement of the ASA during my term as President was the Advancing Integrative Medicine at AOMA event.  We brought together over 80 students and alumni for a full day of free lectures by well-known speakers in the field, some of which even offered CEUs!  I was super proud of this event, and it has shown me that I can accomplish anything I put my mind to.

What goes without saying is that I have found acupuncture and herbal medicine to be very effective.  A bit silly to express it in such simple terms, but there are still a lot of people in our culture who are either on the fence or completely close-minded about acupuncture.  My overall experience in the student clinic was undeniably positive.  I have seen so many patients come through our doors at AOMA, and almost all of them leave satisfied with their treatment.

I have finished the program with the confidence and determination to improve the standing of Chinese medicine in our culture.  Integrating all the various alternative and mainstream modalities of American medicine is my life goal, and the direction in which I will be focusing all my attention post-graduation.  Already in the works, I am helping organize Austin’s first integrative health workers cooperative.  It’s going to be a lot of difficult, ground-breaking work, but in the end it is the only way that I want to practice medicine.  Just as my perspective on life has become more dynamic and capable of understanding new phenomena, the integration of Western and Eastern modalities will make the practice of medicine as a whole much stronger. 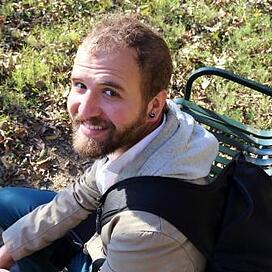 Having studied both Western science and Eastern medicine, David has a unique view of the human body, and in particular the human psyche.  Eastern philosophy points to a hidden, yet tangible, force to explain the workings of the body, while Western medicine only accepts that which is visible and measurable. The two perspectives almost always have different explanations for the same phenomenon, yet drawing lines between the two often creates a richer understanding of the problem.  In this way, a fusion of the two perspectives allows for an extremely versatile approach to medicine.