6 Local Chinese Herbs That You Probably Walk By Every Day

When I started studying Traditional Chinese medicine (TCM) I was overwhelmed with what seemed like the exotic nature of the plants we used. I developed a reverence for these plants and imagined they were somehow different, that they must be grown on the misty sides of mountains and tended by enlightened monks. I kept this notion for an embarrassingly long time, which was confirmed by my inept attempts to grow some of the herbs I thought would be able to take the Texas heat.

(protip: turns out you have to water and care for plants and just because the nursery sells it doesn’t mean it is a good match for my special kind of neglect.)

Fast-forward a couple of years and I had a nice little coincidence convince me just how wrong I was. We have to use the Latin names for herbs on our labels, so I started to get used to going back and forth between pin yin and Latin. Then I did a little work with the City of Austin invasive plant monitoring team, which involved a lot of pouring over lists of, you guessed it, Latin plant names. I started to see Chinese herbs everywhere and quite a few of them are considered invasive. So let’s go through a quick list of some Chinese herbs that you probably walk past almost daily. 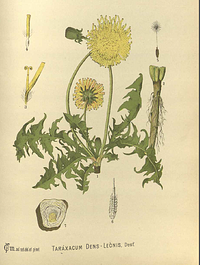 This perennial aster long considered the scourge of the suburban lawn also has an extraordinarily long history of use as medicine and food. The common name dandelion is a corruption of the French “dent de lion” meaning “tooth of the lion” which refers to the toothed or lacerate leaf margins.  The younger tender leaves are tasty in salads, the flowers can be used to make wine and the whole plant is used in TCM where it is listed as a Clear Toxic Heat herb and is one of the five herbs that makes the formula Wu Wei Xiao Du Yin so effective.

Harvest this plant when it starts to flower but before it goes to seed and dig as much of the long root as you can get. Let it soak in tepid water to loosen dirt and then remove any additional dirt with running water. Dry the whole plant on drying screens in the sun. You can separate the leaves and flowers as they will dry faster than the root and don’t need as much cleaning. 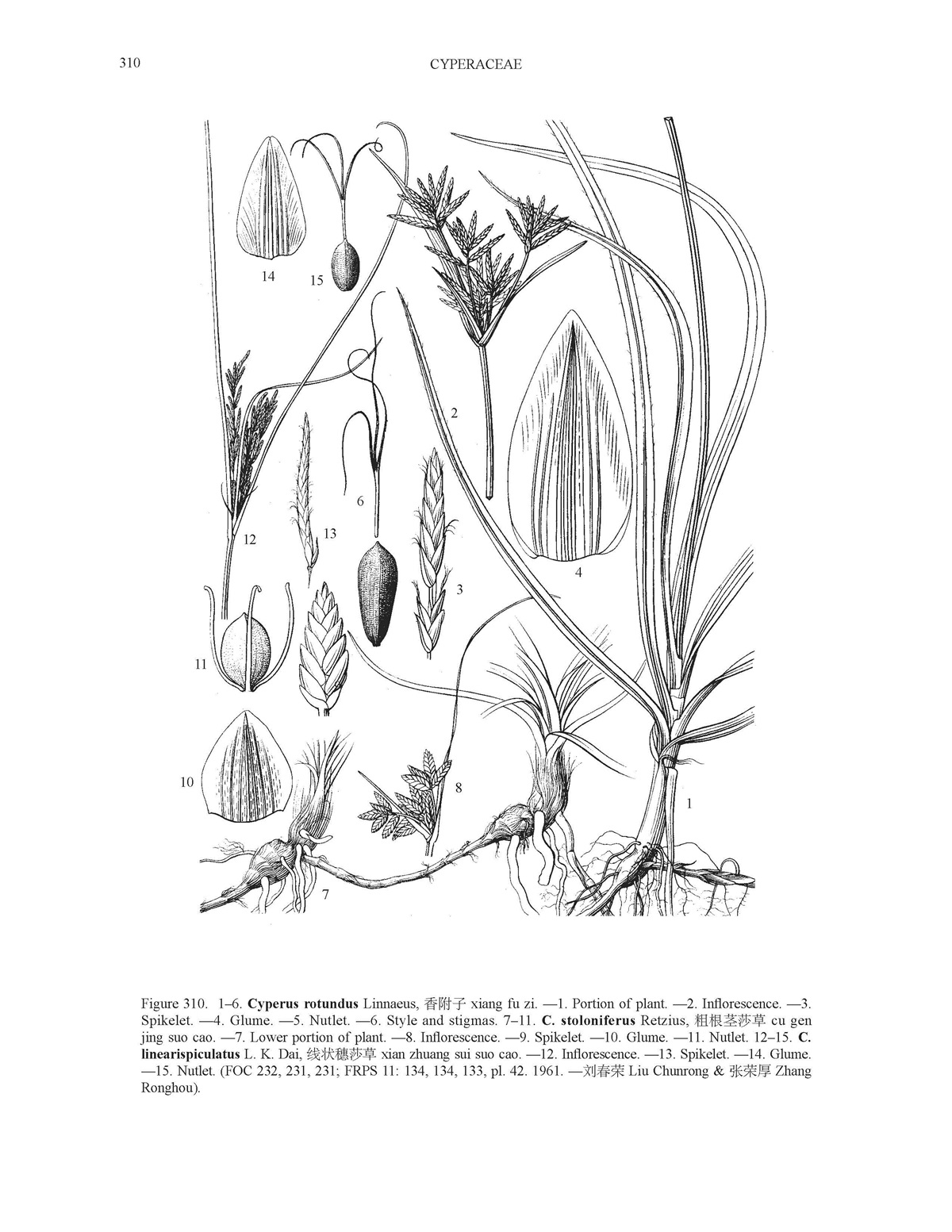 Hated is probably not too strong a word to describe how people feel about purple nutsedge. In fact, it is listed as one of the world’s worst weeds because it propagates vegetatively, is a perennial, and resists almost all control measures. It produces about inch long rhizomes, which is the part we want to use. The rhizomes can be separated from the roots and aerial portions of the plant, pressure washed and then put on a screen in the sun to dry. Xiang Fu is used in TCM as a qi-regulating herb mainly focused on liver qi stagnation.

Honeysuckle does very well in Texas. It can take the heat and is pretty drought tolerant. If you are out hiking around in a greenbelt in Austin and keep a sharp eye you are likely to come across some. The key way to identify the Japanese honeysuckle is contained in the Chinese name. Jin Yin Hua translates as “gold silver flower”. If it has coral colored flowers then it is L. sempervirens and not what you want although the nectar is just as sweet and there is something about sucking the nectar out of honeysuckle that just brings out the kid in you.

Harvest this flower right as it about to open. If it has already opened it is too late. Then, because this flower is delicate, you should dry it quickly. It would be hard to get any appreciable amount of product from a wild stand of L. japonica as you will work pretty hard just to get a couple of grams of dried flowers.

So let’s talk about some trees that are everywhere in central Texas. 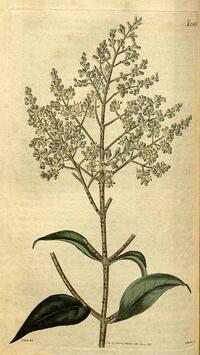 This is so invasive that in just about any disturbed area near water you will find them, in fact unless controlled they can easily take over large stretches of mid-canopy trees in established forests. In the spring they have a very nice cluster of flowers that develops in late summer to a cluster of dark purple fruits. Each fruit contains one or two seeds and that is the portion used in TCM. Pick them when they are ripe, but you will have to beat the birds to them. Dry on a drying screen. You do not have to remove the seeds from the fruit to use as an herb.

In TCM Nu Zhen Zi is used as a Yin tonic and is frequently used in formulations for menopause.

This invasive is as likely to be found in disturbed park areas as it is to be in someone’s yard planted as a specimen tree because of its unusual and beautiful flowers. Both the flower and the bark are harvested but harvesting the flowers can be fiddly work. They are delicate and sticky and don’t all flower at the same time. They need to be cooled after harvest and then dried. According to Wilson Lau, president of NuHerbs, it takes 3 man-hours to properly clean half a kilo of He Huan Hua so that it looks like you are used to seeing it in clinic. Peg Schafer, author of The Chinese Medicinal Herb Farm harvests the flowers but recommends leaving them whole with the calyx and a bit of stem if need be, but to warn potential buyers that there are stems. The bark can also be harvested but, by in large, requires cutting down the tree or at least large branches.

Both the flower and bark of M. julibrissin are listed in the Calm Shen category of TCM herbs for constraint due to liver qi stagnation. 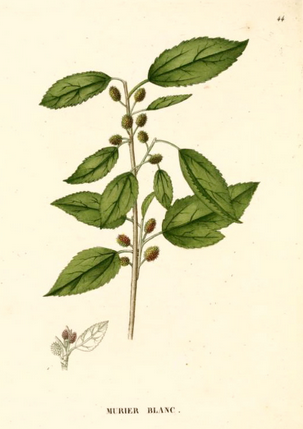 You are probably more likely to find M. rubra (red mulberry) here in Central Texas, but if you look closely you will find the species, M. alba (white mulberry) that is indicated for so many uses in TCM. If you do find one, what you have found is a runaway. M. alba was imported from China in an attempt to start a silk industry that was floundering because M. rubra, a sort-of native, was not the silk worm’s preferred species. That industry floundered further when they could not compete with the low wages paid in China and Japan. (Sound familiar?)  However large stands of M. alba still can be found in the panhandle of Texas where they were also planted as windbreaks. Some of our runaways come from those too.

So what is the difference?  Well, you can’t really tell from the fruit or the bark but you can see the difference in the leaves. Both M. alba and M. rubra have leaves that are anywhere from simple ovate leaves to ones that are deeply lobed but there are two distinguishing characteristics.  M. alba has leaves that are really shiny on the topside and the leaf margins have teeth, but think molars (slightly rounded) and M. alba has duller topsides and its leaf margins have teeth but think incisors (much sharper) You are also much more likely to find M. alba in full sun and M. rubra is more shade tolerant.

This tree’s uses in TCM are varied, from dispelling wind heat, helping with cough, directing herbs to the shoulders and yin tonic. The most likely plant part you will be harvesting will be the leaves, which are frequently used. Pick them then wash in warm water and leave out on screens to dry. It’s just that easy. The twigs should be harvested from the higher parts of the tree, which can be dangerous over a certain height and will require some cutting and drying. If you want to prepare them the way the are prepared for use in China you will need some heavy duty cutting gear.

This is not a simple preparation and will require specialized equipment. However, the fruit doesn’t require anything but beating the birds, raccoons, and possums to it. Everybody loves mulberry.

So get out to the parks around central Texas and see if you can find all six of these Chinese herbs and if you do, think about processing them for personal use. Some things to think about when you are wild crafting is pollution, both air and water. If you are harvesting along Shoal Creek, say in Pease Park, think about where the water came from. It is largely rain runoff and it washes down oil, herbicides, and fertilizers just to name a few. Lamar Blvd. is a pretty well traveled street and every car that goes up and down it, is leaving behind combustion residue. The good news is that most of this stuff will make it into the soil where it often gets mechanically filtered and then bacteria and fungi in the soil go to work on many of the toxic substances. Of course, some of these chemicals are filtered out by the plants and not taken up in the roots and rarely make it to the leaves and fruits. As far as airborne pollutants go, washing the part of the plant you are going to use is a pretty good way to remove most of them.

David Jones L.Ac., a graduate of AOMA, is one of the founders of The Third Coast Herb Co. where he is chairman of the board and the vice president of new product development, which is quite a mouthful so he prefers Chief Herb Nerd.