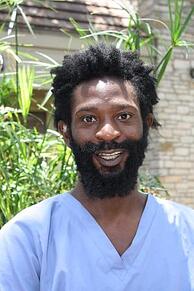 AOMA student, Gregory King can usually be found by his resounding laughter echoing in the hallway.  Greg comes from Louisville, Kentucky where he discovered martial arts. During the first year of the program at AOMA he was working as a mentor for inner city youth. His case load included children who struggled with suicidal motives, depression, gang violence, and social isolation. Greg says, “I am grateful for the learning of the experience but it was extremely difficult. I overcame by really taking myself to the mat.” He began collaborating with world renowned martial artist Tom Callos and joined Ultimate Black Belt Team. Greg says, “This simple practice gave me a focus on becoming stronger because I was feeling the weakest and most vulnerable I have ever felt in my entire life.”

Greg received his first acupuncture treatment from Umaru Jutte, one of the most experienced practitioners in Tennessee. Another friend that studied acupuncture and had Umaru as a mentor Umaru really inspired me. “Lisa always encouraged me to practice medical qigong for hours a day to augment the treatments I was receiving from her. This made me a better student and martial artist.”

Greg did his undergraduate senior project on “Meditations on Medicine” where he integrated his own health philosophy with medical traditions of Kamet, Tibet and China. While engaged in this project he felt called to ministry and began applying to seminary schools. After the passing of several family members Greg ended up regrouping in Austin with a set of close friends. Around the same time, his health started declining and he felt that beginning acupuncture school at AOMA would help center him and improve his health. Now, with the help of AOMA professor Dr. Joel Cone, practicing martial arts, and receiving regular acupuncture treatments, Greg feels like he as healthy as he has ever been.

Greg is involved in AOMA Jujitsu club and continues his martial arts studies. In clinic, he is inspired by working with Dr. William Morris because of his passion for Chinese medicine. He says, “Will is excited and knowledgeable about what he does and that invokes excitement in me. He is able to teach a method that is practical and able to integrate what I am currently learning in my classes.”

Greg is also very politically minded when it comes to healthcare. He participated in one sit-in against the state of Tennessee for cutting 350,000 people from state funded TennCare. His passion for health and wellness is marked by his personal mission to study models of healthcare that are accessible to the underserved. He is also moved to educate people about investing in local and organic foods and the dangers of big farm industry and genetically modified foods.

Greg is the first from his family to graduate with a college degree and upon receiving his masters at AOMA he has big ideas of how to promote the medicine. He would like to do research to better understand the biomedical overlap of western and Chinese medicine. He wants to provide acupuncture to individuals that cannot afford healthcare, particularly the Appalachian community that has been devastated by industrial development. He has also been thinking about opening a healthcare coop as a viable solution to get people invested in their own health and promoting the ginseng industry to help people become more connected to making their own medicine.